So what do you know?  We ask Richard Shepherd, Insolvency Solicitor, what makes him tick? 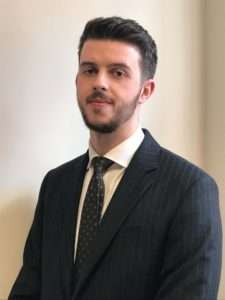 Why did you become a lawyer?

We would all be lying if we said we weren’t inspired by the likes of Martha Costello from Silk with the ambition to become Queens Counsel.

Your proudest moment in your legal career?

Although fresh faced in the legal profession and hopefully I have my moments to come, there was nothing more rewarding than a pat on the back from a client after supporting both him and Counsel in a week-long trial in the High Court.

What piece of wisdom would you pass on?

As one barrister once said to me early on: “ride the wave, just remember to polish your surfboard along the way”.

What is your unfulfilled ambition?

After playing guitar for a few years now, and with the fingers improving (slowly but surely), I’ve promised a friend that by the end of next year we’ll be on-stage, and maybe the year after that, the main stage at Glastonbury! One can dream.

Persons who most influenced your life?

My parents, being the absolute rocks of my life through thick and thin.

What do people get wrong about you?

I wouldn’t say it’s a wrong as such, but many people give me a confused look when I tell them the extremities of my music taste. ABBA to Metallica – how do you describe that jump?

When people in the office don’t replenish their snack drawers.

TV, there’s nothing like a good binge, the last being the second season of True Detective.

Now this is the hardest question, but if I could only listen to one song for the rest of my life then it’ll have to be Leonard Cohen’s Suzanne.

After thinking long and hard, it’s got to be beer hasn’t it. There for you whenever you need it.

Some people tell me that when I reach 70 years old, I’ll regret having a tattoo. Hopefully, I won’t be regretting anything more than that.

The person from history you would most like to have a pie and pint with?

Hunter S. Thompson, the outlandish and eccentric writer. A man of many myths, although all undoubtedly true. However, I think he’ll skip the pie and jump straight to the pint.

How would you spend your fantasy 24 hours, with no travel restrictions?

I would start the day by waking up and having an espresso overlooking the Bavarian Alps. Then with a group of friends I would go on an escapade through the Vietnamese jungle, hit up Victoria Peak in Hong Kong to watch the sunset and spend the rest of the evening floating around the bars in Berlin.

So, now you know a bit more about Richard

There’s more to the Insolvency Solicitor that Richard is in his professional life. If you do need advice and help from Richard in his areas of specialism, just call him on 0121 200 7040 or contact him. The first discussion, over the ‘phone or a coffee, is free.