What does a Birmingham based firm of Solicitors have in common with Steven Spielberg? In September, the outside of our offices in Water Street, and much of the surrounding Jewellery Quarter area, were transformed into an outdoor set for Spielberg’s new movie, Ready Player One. It was quite an experience for our team, quietly working away inside on their normal diet of director disqualification and insolvency litigation cases!! 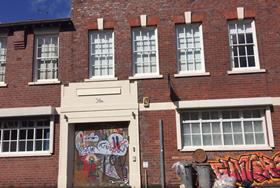 Our Office Transformed for Ready Player One

The film is set in 2044 Ohio, and is a Sci-Fi Thriller, based on the book of the same name by Ernie Cline. Scheduled for release in March 2018, the production team arrived to set everything up in advance for the shoot that took place between 6th and 10th September. Look out for British actors Mark Rylance and Simon Pegg who both have starring roles.

The film has nothing to do with Director Disqualification

Sadly, our director Neil Davies didn’t manage to get a selfie with Steven Spielberg, and “….our offer to be alien or futuristic extras similarly fell on deaf ears!” Not to be denied, however, Neil did leave Spielberg a message with the production team that if he was ever needed litigation or insolvency advice, he should get in touch. It’s not known if the message reached the famous director.

All in all, it was an entertaining few days, and good to see Birmingham selected as a venue for a major part of the filming. We were also happy to donate the ‘nominal disruption fee’ we received from Deep Blue Productions to MacMillan Cancer Support.

How to deal with the Insolvency Service Criminal Investigation Team

This case study explains how our experienced director disqualification solicitors worked to get the Insolvency Service to drop its case against our client. This was a criminal investigation and could have resulted in a custodial sentence. Read More »

Our Commercial Litigation Solicitors successfully represent a client with a Freezing Order over a potentially ruinous £5 million claim. Read More »